My weekend as a part-time Puppy Raiser

Read about Sandy’s weekend adventure as a part-time Puppy Raiser! These amazing volunteers sometimes fill in on a temporary basis as needed.  Winslow is a yellow lab, currently in training to become a Psychiatric Service Dog and his full-time Puppy Raisers are currently away on a trip and were unable to take Winslow with them.


Guess what? Exceptional Sidekick Service Dog in Training Winslow is here for the weekend! OMG what a good boy – and he’s all puppy!

Quick recap of our first 12 hours!

Last night was all about fun he met his furry weekend brother Beau… they ran, they played, they ran some more, more, more! Instant friends. They did LOTS of polite puppy sniffing and all those good things you hear dogs should do when they meet. Beau was a little confused when I invited him in thinking, hmmm, did I sign on for this too?

Winslow explored his weekend getaway home, sniffed every inch, checked out all Beau’s toys and tennis balls. Initial favorite – the birthday sloth Beau got last week. I cringed slightly, but Beau was a great sharer and they considered tug of war. Then it was time for a little reinforcement – the hardest reminder and the sentence I said most frequently was “Winslow honey, you were not invited on the couch, bed, chair, couch.” But, he’s doing better and we created ‘his spot’ that he’s invited up to.

Back outside we go and well, the shenanigans started as Winslow got just a bit frisky. So, back inside for a half hour of obedience fun to stave off over exuberance. Sit, Stay, Down, Sit, Stand, Touch wait photo, photo, photo! Oh- and we practiced getting dressed in his spiffy TESSD vest and he let me slip it right on! Not even a treat needed.

I’m not gonna lie, the night was something between a teenage sleepover and babysitting a toddler that’s spending the night for the first time away from mom. Winslow ‘loaded up’ in his crate and Beau on his pillow next to me and fast asleep they went.  Until Winslow snored! Beau barked! Winslow tossed and turned… Beau BARKED – no intruder Beau back to sleep.  But, truthfully, it went beyond well for our first night together.

This morning Winslow realized I was his ‘person’ for the weekend. Outside we went to ‘get busy’ and play for a bit. However, the difference today was he played with Beau for a run around the yard and ran immediately back up on the deck to ‘check’ on me. This boy is destined for great things – I cannot wait to follow his progress!

Off to our next adventure – meeting a new full-time puppy raiser for one of our Hamilton puppies! Check back later for more details. 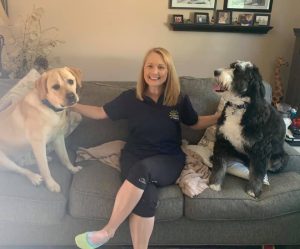 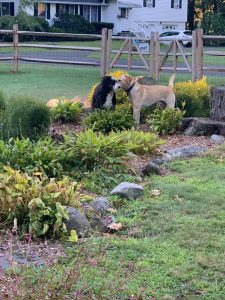 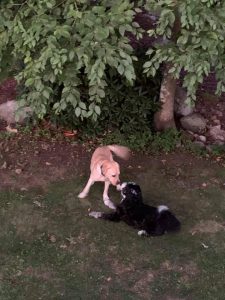